The hard drives finally came, so in this post, I’ll be documenting RAID (mdadm) and LVM (with lvmcache). I have a Samsung 970 EVO NVMe SSD which already has 3 partitions in this order: boot, root, swap (without LVM). In this post, we will be adding 4x 3TB Seagate Barracuda drives in RAID10 with mdadm, and with LVM top. We will then move the root partition to the RAID10 array.

Here, we build a RAID array, then build LVM on top. While LVM itself implements RAID, it seems that there is not as much documentation as compared to mdadm’s, so I went with this approach. For the caching layer, I originally considered bcache. However, it is recommended to put LVM on top of bcache, and since I ended up moving the data to the RAID array first, it was very annoying to have to move data again, so I chose to go with lvmcache.

Creating a RAID array was straightforward. I followed the instructions over at DigitalOcean, substituting in 10 for 0: mdadm --create --verbose /dev/md0 --level=10 --raid-devices=4 /dev/sda /dev/sdb /dev/sdc /dev/sdd. It should be noted that once the RAID array is created, the entire array is exposed to the operating system as one drive. Here, we created it as /dev/md0, so we will be using that drive.

Now, we set up the array for LVM:

Then, we copy over the data from the SSD:

At this point, modify /etc/fstab to mount /dev/VolGroup00/lvolroot as the root partition. You may need to enable extra kernel modules for LVM. Try to boot from this partition to ensure that everything is fine, since we will be deleting the original root partition. When booting with the new partition, use lsblk and df -h to ensure that the root drive is mounted at the new location, and that the old partition is no longer used. After this point, there will be data loss if the copy failed.

Look at the space! 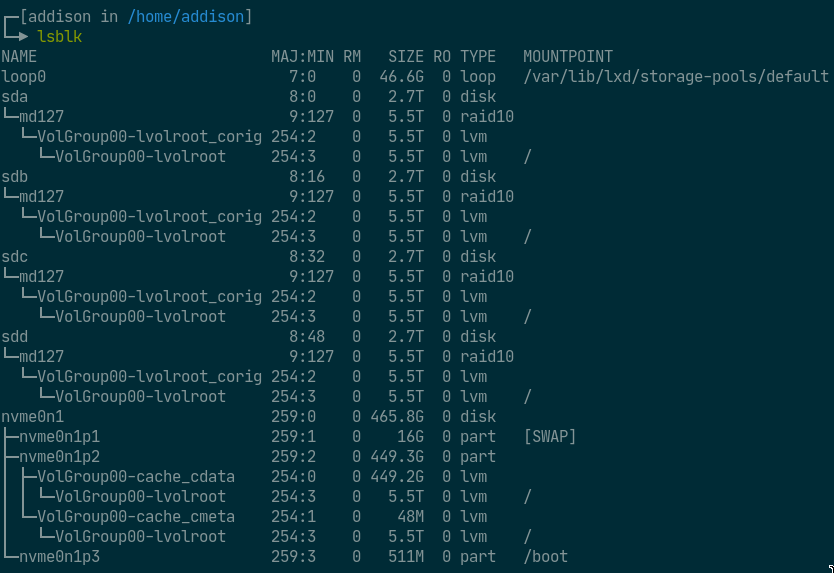