For half a year (and more), I’ve been thinking about building a computer to learn and train ML models on, as well as to host my web applications on. Over this past half month, I finally bit the bullet, opting for a Ryzen 3700X paired with an Nvidia 1080 Ti. The full parts list can be found here. I chose to install NixOS, a declarative operating system, and this post outlines the full software-side process, including several hurdles I came across.

I chose a 3700X mainly for the insane number of cores, as hosting several concurrent applications would require a lot of multithreading. I considered the 3600, and I figured the increase in cores was worth the small bump in price. For the GPU, I debated between the 1080 Ti and a 2070 Super, and I eventually opted for the 1080 Ti for the increased memory, figuring that the FP16 performance wouldn’t be seen by me (at least not for a while). (Later on in the month, my neighbor gave me an old computer, and I found a 1080 inside. I’m extremely lucky and grateful for him :’).) The main hard drive is an NVMe SSD. The hard drives are used Barracuda drives, and will be purchased off of Craigslist. Eventually, once the coronavirus wave passes and I purchase the hard drives, I will use bcache to turn the SSD into a caching layer, with the main memory on the hard drives. The configuration will use LVM on top of software RAID 6, so that storage is very easily configurable and reliable.

NixOS installation is pretty straightforward. Their guide is very well written, so I defer to them for installation instructions. My dotfiles can be found here.

Since I would be doing a decent amount of computation, and since my main laptop is a Pixelbook, I wanted to be able to have access to a Python interpreter anywhere, particularly hosted on a website. As a result, I decided to use Jupyterhub, which is pretty stable and has really good documentation. I set up the installation in an LXC container running Ubuntu 18.04, following the instructions here.

Installing new kernels for JupyterHub was a huge headache, however. There are a lot of package managers for Python, including virtualenv, venv, and conda, and often their usages overlap with one another. Maintaining them is quite the headache! For JupyterHub, conda is used to make environments, and kernels are used when executing code inside JupyterHub. Below is a detailed rundown of creation of a new conda environment for a particular user:

The last thing I needed to do to make the container GPU-accelerated was to pass the GPU through as a device from the host OS to the container. It was definitely not trivial.

This was by far the most annoying part of this build. Stéphane Graber’s blog has a very very well written post about how to get GPU passthrough to work, but since I am using different operating systems, I will highlight some things that might trip others up:

Again, Stéphane Graber’s blog has another post on getting user mappings working in containers. This time, I didn’t run into particular issues, and following his mappings worked very well.

Once the coronavirus situation dies down, I will be able to purchase the hard drives, and I will edit this part with the installation process.

Jupyterhub up and running: 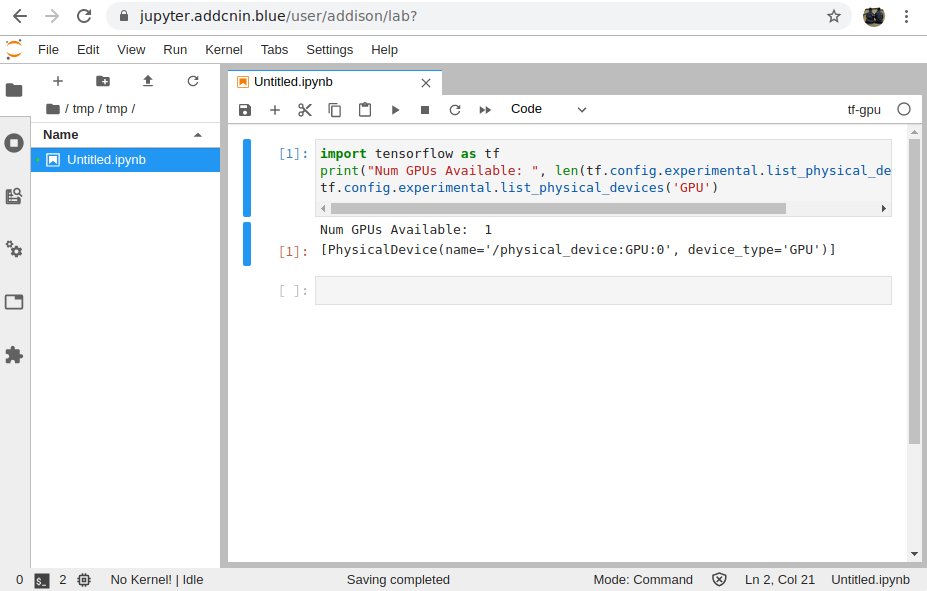